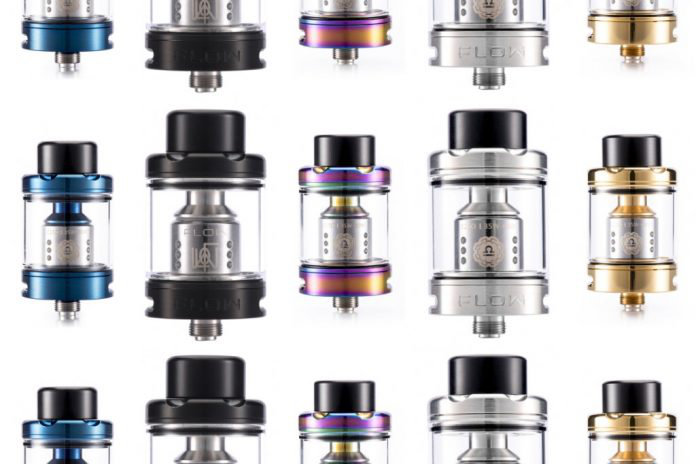 The Wotofo Flow is a new 24 mm subohm tank that is Baby Beast compatible.

The new Wotofo Flow is the latest release from the ever-growing tank category from Wotofo. However, it’s been a while since they released a sub ohm tank.

The Flow has a 4 mL juice capacity with an insert to make it TPD compliant. It comes with two 0.25-ohm coil heads which can be used up to 60 watts. However, it is also compatible with Baby Beast coils, which makes it even more versatile. It also has dual-adjustable airflow slots (measuring 12 mm x 2 mm) and a threaded top-fill cap with a wide-bore 510 Delrin tip.

In this review, we are going to focus on how well the Wotofo flow performs with the included Wotofo coil heads.

As with most of Wotofo’s tanks, the build quality is really good. The whole tank has good threading, especially the top cap which can unscrew easily. The top cap has little divots around the edge that helps with grip.

A new little quirk we are seeing in some recent tanks is the inclusion of what can only be described as a TPD reducer. It is simply just a rubber insert, that can be removed to change the tank from 2 ml to 4 ml capacity. If you are affected by the TPD, you are apparently supposed to leave in the reducer. I very much doubt anybody is going to leave it in. So I’m not entirely sure if that truly constitutes a “TPD-compliant tank,” however its good to have such an easy fix.

This is really what interested me about this tank. I think it’s great that it is compatible with Baby Beast coils, but I was intrigued to see how well the Wotofo coils would perform.

They have a rather unique wick hole set-up on the coil heads compared to other sub ohm coils. Most other coils of this nature opt for large wick holes to help with wicking of viscose (High VG) ejuice. However, the Flow uses four vertical rows of three small 1.4 mm wick holes.

After seeing the wick holes in person, I was a little skeptical as to whether they would be sufficient for high VG liquid and could help produce good enough airflow for a decent direct-to-lung vape. However, it seems looks can definitely be deceiving.

There’s no doubt about it these 0.25-ohm coils perform brilliantly. I have absolutely no issues using 80% VG liquid; there has been no spitting or flooding of the coils either. They do take a few hits to break-in after you have primed them, but the flavor just gets better and better after that.

I’ve been running the tank on the Vaporesso Revenger at the suggested 60 watts (maximum). It has really has been as simple as put in the new coil set it to 60 watts, and away you go. I did mess with the wattage curve on the Revenger to have a higher initial punch, but to be honest; they performed just as great just at the standard settings which I reverted back to.

I only ran into little issues when I forced the coil through rigorous chain vaping, after about 5 or 6 consecutive long draws I was noticing a slightly burnt taste coming through. However, that’s not how I typically vape and dropping the hit time caused me no issues whatsoever.

One big positive from this that I noticed is the tank does not seem to guzzle juice compared to others in this category, one full 4 ml refill lasted me a good few hours at my regular vaping rate, which I was happy with. Also switching out the liquid flavor only took around 10 or so vapes before the previous juice flavor had gone entirely.

This tank is not built to be a showstopper in either the cloud or flavor department; it is a mid-wattage sub ohm tank. However, the flavor I was getting from the Flow was really impressive. I’d definitely put it up there with other flavor sub ohm tanks.

I was genuinely impressed with the Wotofo Flow coils, and I’d probably stick with those over the Baby Beast ones. They caused no spitting or flooding, just a good flavorful vape with no issues.

The quality if the airflow is smooth and does produce a good amount of vapor from even a short hit (at 60 watts). It’s not the most wide open airflow, more on the border between a direct lung and restricted lung hit.

I was a big fan of the Wotofo Troll RTA when that was released, and I’d say the Flow sub ohm tank matches that for airflow. So if you are into huge airflow, this may not be the tank (or coils) for you, but remember these are mid-wattage coils being used here.

I think for once this is a very aptly named tank; the Wotofo Flow really does Flow! Despite my initial reservations about the coil head design they have been more than capable of dealing with high VG juice and produce a really great vape.

While it is not the best tank I’ve ever used for flavor or vapor production, it is a consistent and solid performer – I very rarely had a bad hit, and it didn’t drain through my e-liquid like other sub ohm tanks.

If you are a mid-wattage vaper looking for a new tank, this is certainly a great choice. If like me you are an RTA fan and prefer a little more control over your vaping experience, this may not win you over to the pre-built coil world. But it could be a great back up tank to keep in your vape collection. 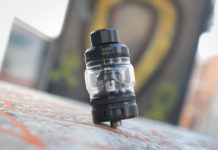 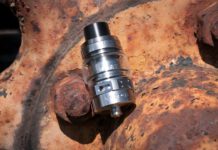 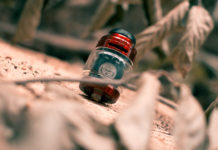